Colin Stainer EngTech MCIPHE RP RHP received an Honorary Fellowship of the Chartered Institute of Plumbing and Heating Engineering (CIPHE), at the annual ‘Dinner with the President’ on 13 March at The Honourable Society of Gray's Inn.

The award has been given in recognition of his outstanding commitment, dedication and service to the Institute over a period of more than 40 years, along with his devotion to improving standards within the plumbing and heating industry. 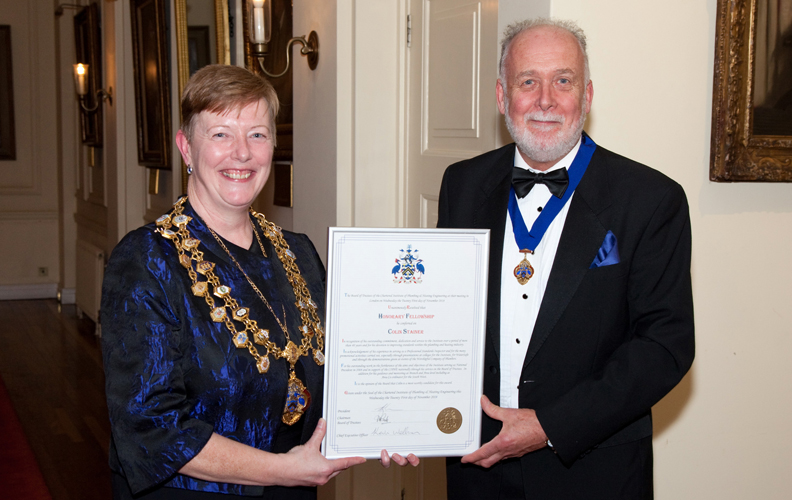 Colin not only served as a Professional Standards Inspector for the CIPHE, but was its National President in 2008 and has supported the Institute nationally through his service on the Board of Trustees. As Area Co-ordinator for the South West, Colin’s guidance and mentoring at Branch and regional level has been invaluable.

Colin has always been enthusiastic about promoting the Institute and professional high standards; especially through presentations at colleges, via work in conjunction with WaterSafe and through demonstrations given at events of the Worshipful Company of Plumbers.

As Colin enters the ranks of Honorary Fellow, CIPHE CEO Kevin Wellman said, “On top of forging a highly successful career, Colin has also worked tirelessly for the CIPHE for more than 40 years. This recognition is an amazing, but unsurprising achievement, for someone whose passion and commitment to the industry is second to none.“