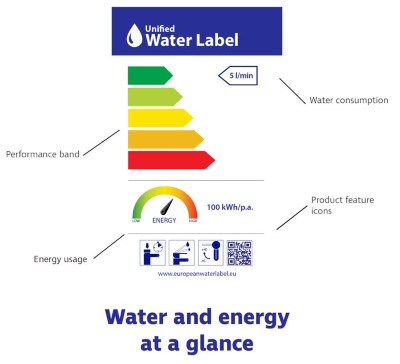 Brexit may well still be contributing uncertainty in the United Kingdom, but one thing is for sure, Europe’s bathroom industry has decided to work together to simplify the identification of water and energy efficient products.

The European Water Label Scheme - an Industry-wide, voluntary labelling scheme for water using bathroom products - has had an overhaul, with four existing different labels showing energy and water use, incorporated into one single Unified Water Label. Having been a key contributor in its creation, Yvonne Orgill, CEO of the Bathroom Manufacturers Association, has now been appointed as Chief Executive for the new scheme.

The scheme’s primary role is to educate the consumer on water and energy use, so they can make informed purchasing decisions on bathroom products. This new simplified label gives information at a glance on:

This helps installers to offer valuable advice and support and consumers to choose the most efficient and appropriate products.

Additionally, the scheme provides easy access to a database of bathroom products, that when installed and used correctly, will use less water, save energy and save money. You can find this database, plus lots of tips and useful information online at http://www.europeanwaterlabel.eu/